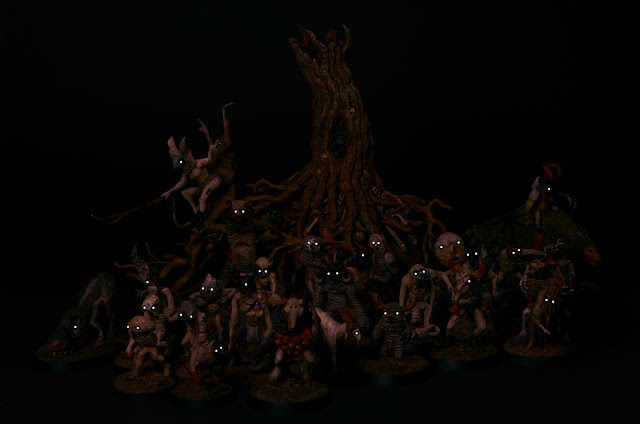 I've been adding to one of my favourite running projects, my Beasts of Chaos gang. Now I've completed the second unit of Ungors and added a Smashbash monster and some fantastic new metal sculpts from Gardens of Hecate and Andrew May Meridian Miniatures. More pics below the jump. 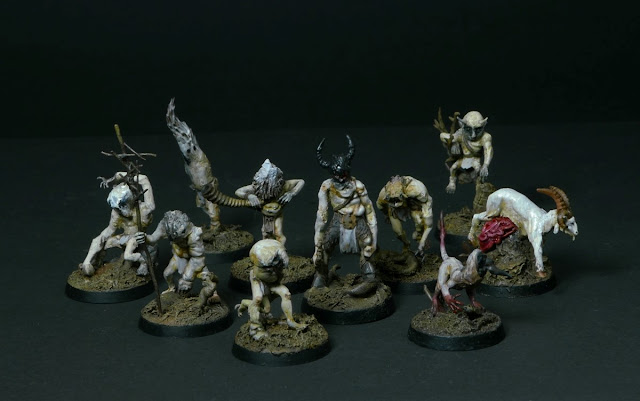 Here's the second unit of Ungors, making two complete game-legal units of ten. I showed some of these conversions before, and I've since rounded out the unit to its full strength. Including a hornblower - something I was unsure about, since these Ungors are extremely low-tech and possibly not even sentient. A banner is fine - any creature can hold an interesting stick - but playing a musical instrument might suggest a level of civilisation that I was trying to avoid. Let's say it's gnawing on an old animal horn and unwittingly producing noises.

As before, the main source for these kitbashes is the excellent Goblins from GW's Hobbit range. Almost all of them had their arms, legs and torsos separated, swapped around and recombined. I also used a lot of Aves Apoxie Sculpt, which is great for bulk projects (I find Green Stuff easier to work with). The non-Goblin conversions are from the Warhammer Underworlds monkey and a goat carried by one of the Rockgut Troggoths. I think a couple of more obviously animal-like Ungors makes the unit feel wilder. 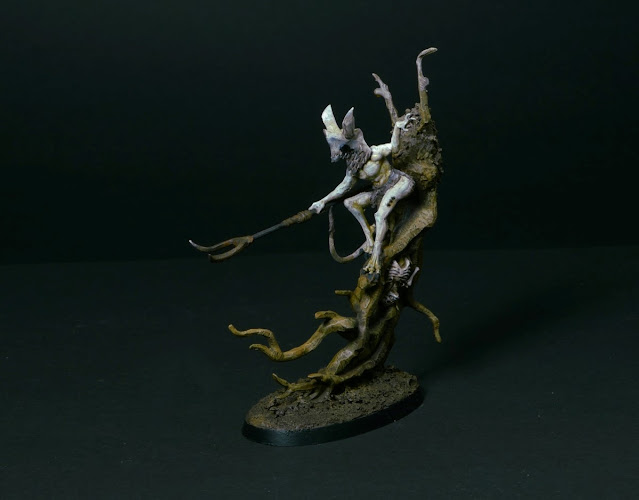 Next up is this character I made for Smashbash. After I made the Herdstone/Tree of Woe I had the central root part left over - too cool not to use. It became the throne of this devilish creature. Looking at the old Beastmen armies books I liked the Warhammer Fantasy lore that dug into folkloric superstition, especially things like the Beastmen's connections to pestilence, devilry, the sort of problems that plagued rural medieval villages. That's why this character got a pitchfork from the venerable WFB Zombie kit. Its head is in fact the perfectly-shaped lower jaw of the Orc Boar that became the Bbrogganogh (never throw anything away!). 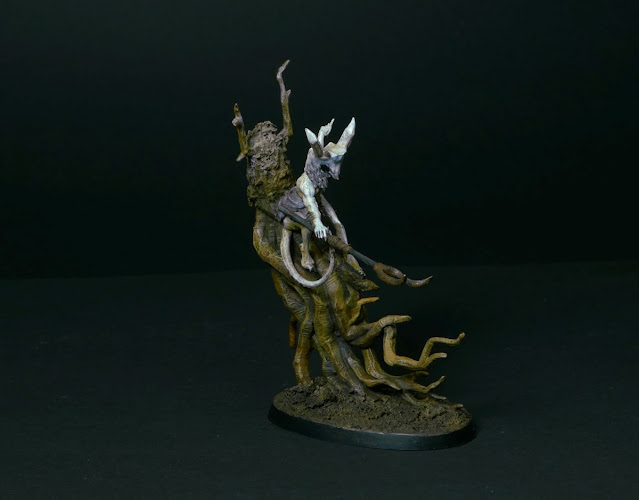 Finally, some models that are metal and aren't converted at all, from the fantastic Folk Horrors collection sculpted by Ana Polanšćak and cast by Andrew May Meridian Miniatures. 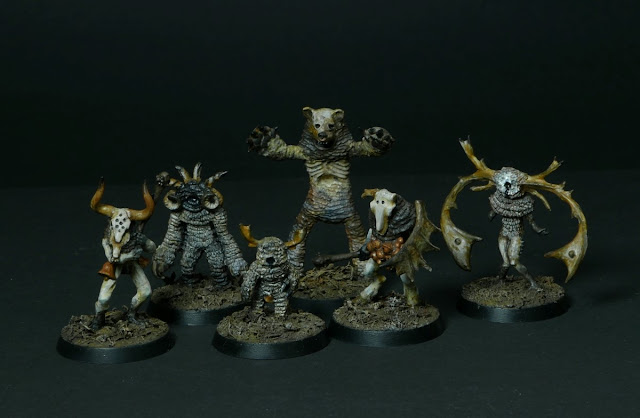 I was thrilled to see these released. For one thing, I've long been a fan of Ana's work - and also they're a perfect fit for this project, which drew inspiration from many of the same sources as the Folk Horrors miniatures. Particularly the hairy, straw-thatched, wooden, bell-laden costumes from traditional folk festivals - check out some of the photos of Roberto de la Torre for example. I'm planning to use these six as Gors, and eventually convert four more to complete the unit and try and bridge the two model styles. The other models in the Folk Horrors release are equally as beautiful, but their flowing robes and skulls suggest a more overtly ghostly/supernatural quality to me (whereas my Beasts are earthy and animal-like). I will certainly use the remaining sculpts in a future project.

With that, I'm leaving the Beasts of Chaos project for a little while to return to some Necrons, another long-running favourite project of mine. I will try to have something to post here very soon. In the meantime, you can keep up with me on Instagram, where I post a little more frequently.