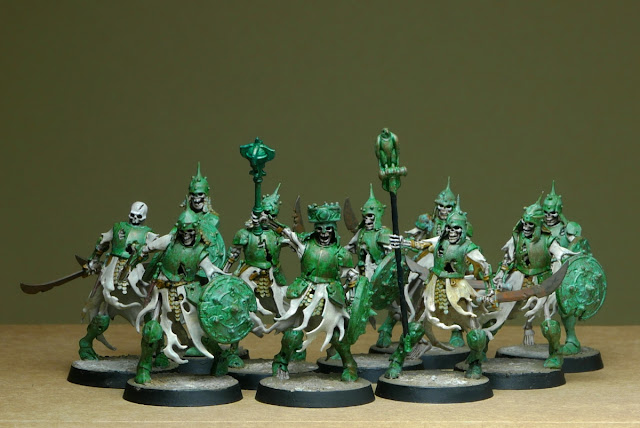 This year's big project is a Soulblight Gravelords army for Age of Sigmar that's heavy on the skeletons. If you've been following me on Instagram, you'll have seen all my work in progress pictures on there. It's been a while since I posted something on this blog, so here's a bumper post of completed skeleton units of all types. Lots more pics below the jump...

I'm going for a strong focus on an unusual metal colour scheme for this project. It's all bronze armour everywhere. And specifically an ancient bronze that's aged a nice shade of green. I put a tutorial on my Instagram for about I achieve this colour - lots of layered greens and blues with some liquid verdegris pigment from Greenstuff World. 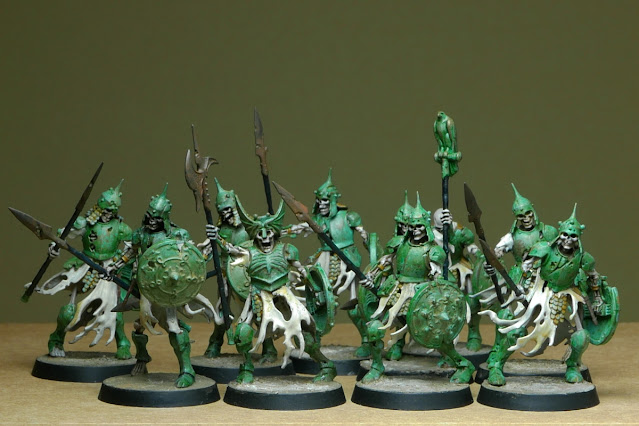 I'm favoring bronze so much that the standard bearers don't have flags - instead they have bronze animal standards (the two Deathrattle units use the same bird part from the Lumineth archers kit, which is nicely understated as Warhammer bird models go). The goal is to make them look like an ancient army that has slumbered in a mausoleum for millennia before being resurrected all together. 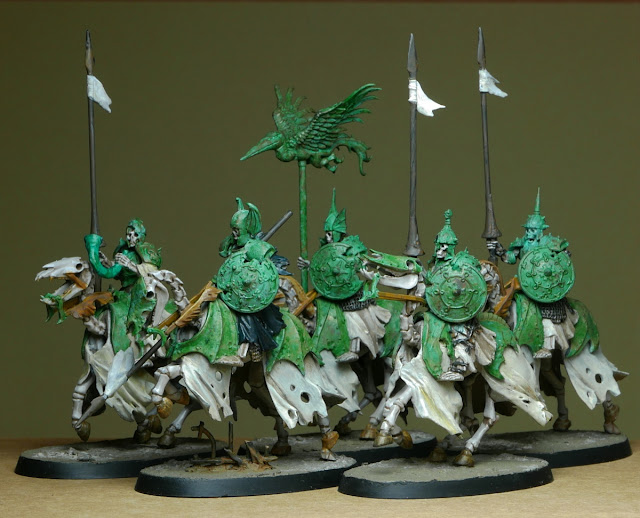 All the cloth is bleached colorless with age, which helps focus the colour scheme around the intense green. I added some microbeads as embellishments to the shields and helmets. I think this evokes some bronze age decorative metalwork. 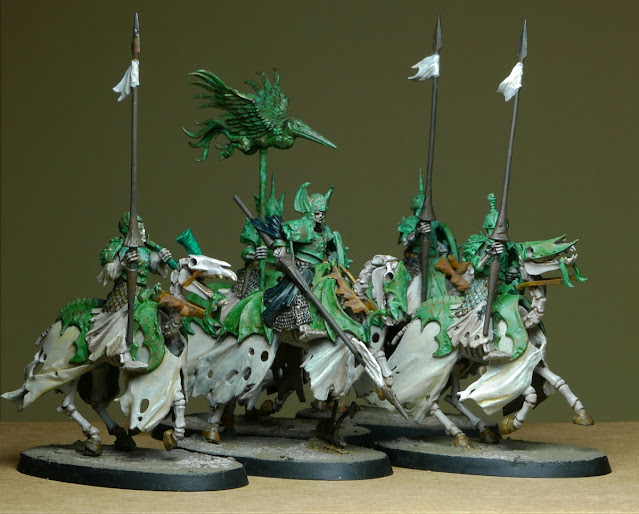 The Black Knights bird standard is a combination of the magic vulture from the Tzeentch Acolytes kit and the stork head from an old Bretonnian kit. I like the stork head part so much I've used it in no less than 3 conversions to date. I'm really pleased with the ornate look of this bird standard, which looks ancient Chinese. Ancient Chinese bronzes were one of the reference points I looked at for this project. 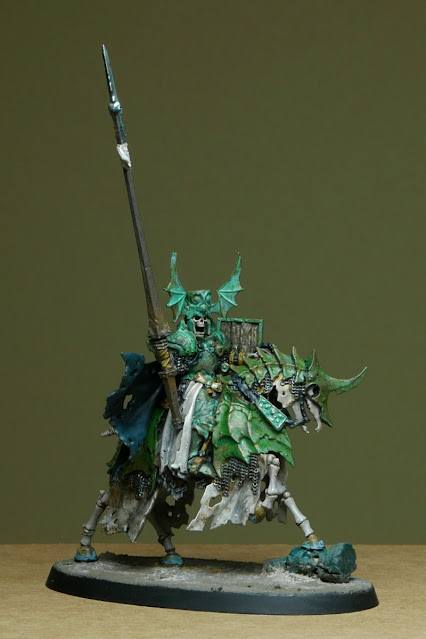 With this green armour recipe, it's possible to vary the balance of different colour layers for different effects. The Wight King on Skeletal Steed has an extra layer of verdegris pigment on his armour to differentiate him from his armoured horse, and also to stand out as a hero model. I love this new kit, and did only a little conversion work to change his helmet into a cylindrical flat-topped helm. 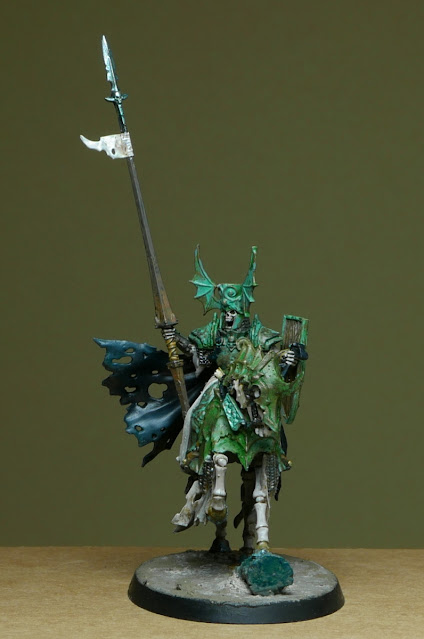 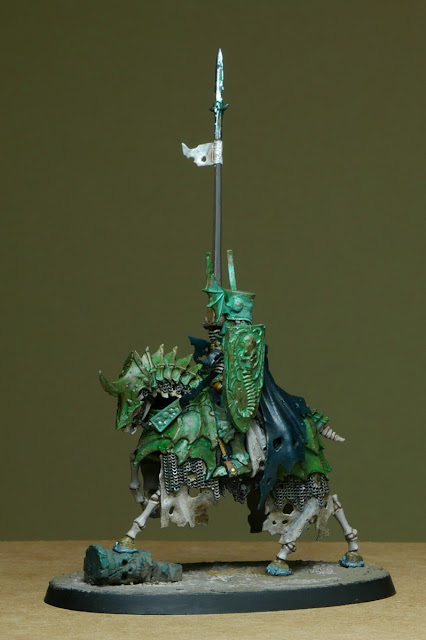 Since this is a skeleton centric army I went for at least one of each Deathrattle unit (not shown here yet but I'm working on some Grave Guard). A Necromancer seems like a must-have for any Soulblight army with his fight-twice spell, but an evil old man wasn't going to cut it in a skeleton army. So instead I kitbashed a skeletal sorcerer. 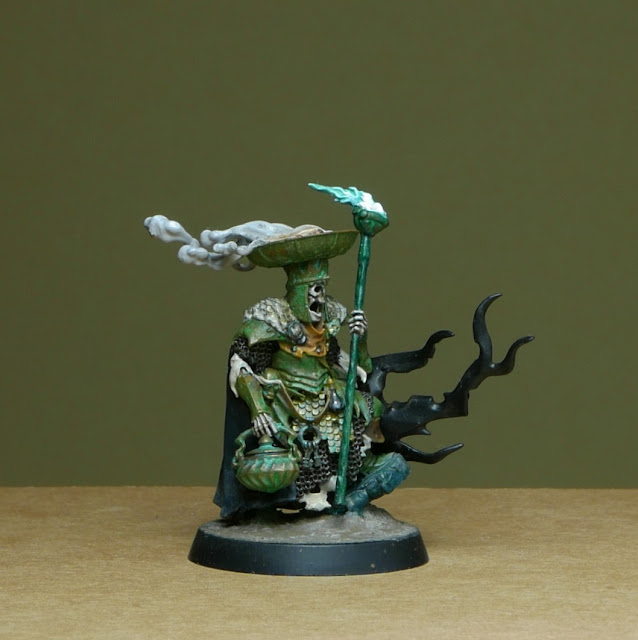 The most involved kitbash in the army - this guy uses a Wight King on foot as the base model, with a smoking incense brazier from a Lumineth character as part of his helm. He also got an arm swap and some circular chain mail from some Deathrattle skeletons, an Idoneth pot (full of alchemical ingredients), a staff-top brazier from the Hexwraiths, and a billowing cloak from a Nighthaunt model. 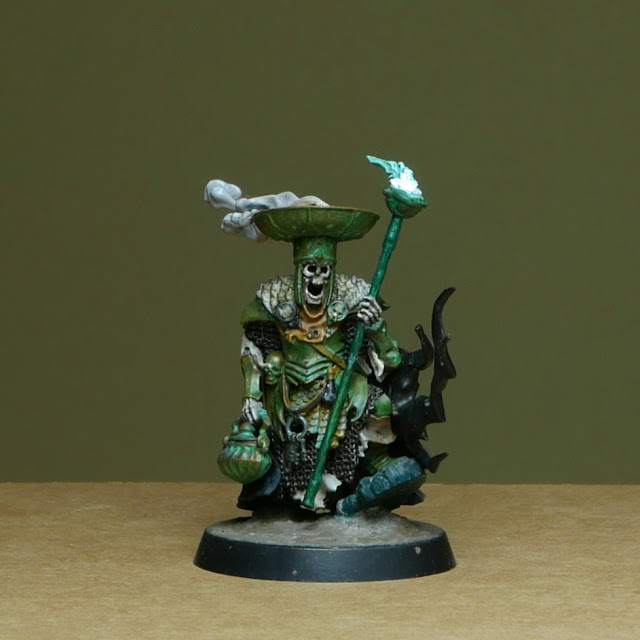 A skeleton wizard (a liche?) is a better fit for an ancient army of revenants, and is also a good excuse to have another skeleton character in a hero role. I like the potential for Soulblight armies to switch around themes a little between units (I believe Mengel Miniatures is currently working on a zombie-themed force!)

There's still more on the way. I have a unit of converted Grave Guard in progress, and even some non-skeleton hangers-on. Follow me on Instagram for more regular updates.

Finally, here's a reference image I've been looking at throughout this project. An altar set of Chinese bronzes from the Met Museum's collection: 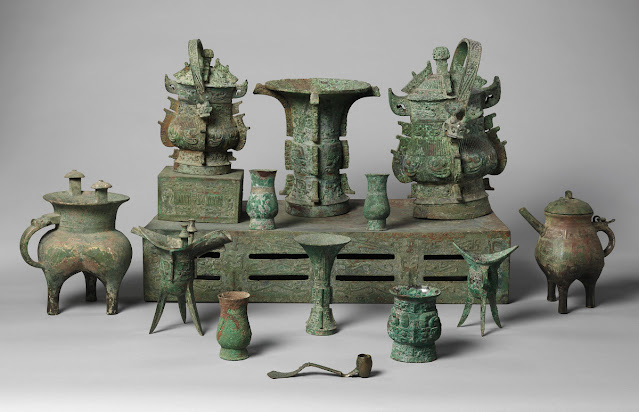