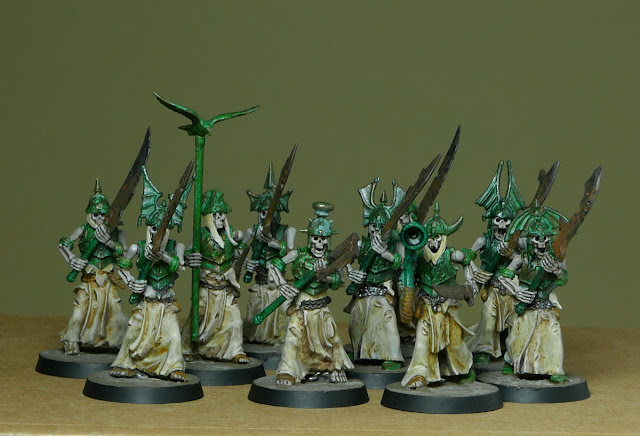 Continuing my skeleton-heavy Soulblight army, here's a unit of converted Grave Guard. Details about the conversion process below the jump.

The new Deathrattle Skeleton kit is excellent and really fits my concept of a uniform ancient army that has been resurrected. Unfortunately the Grave Guard kit really shows its age next to the new models. To bring these elite warriors up to the same stature as their counterparts I kitbashed them with the Empire Flagellants kit. 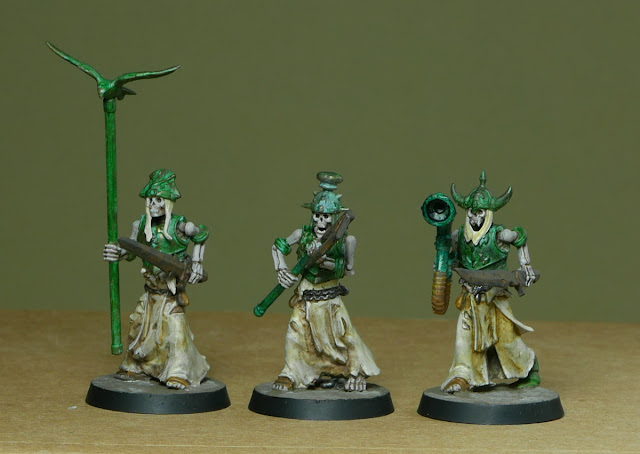 The Flagellants met some important criteria for this conversion: they're one of the few remaining plastic kits that have those cool Middlehammer robes with rips and tears and ragged edges that evokes the old school Wight models. They also predate the latest scale creep and are still an understated human size. Finally they're relatively cheap and easy to come by. A perfect bridge between old school and new school for this conversion. The conversion process involved simply snipping them at the waist (actually closer to the abdomen to add a bit of intimidating height) and then filling the gaps with putty.

I filled out the conversion work with some of the older Skeleton Warrior helmeted heads so that there'd be no repeats. I also switched a couple of the weapon blades with Nighthaunt bits to avoid repeats. The champion's helmet has a round piece snipped from a Space Marine weapon pipe (I think a plasma cannon?) a totally random piece that just worked here as a bit of ornamentation. The banner is from the Lumineth Archers - an alternative hawk to the seated hawk I used on the Deathrattle warrior's banners. The trumpet is from the old Goblin kit.

The biggest hassle was the feet. I tried to get away with painting the Flagellants bare feet to look skeletal as much as I could in order to save time on converting them. And some of the feet I simply replaced with the original armoured Grave Guard boots. I think it's a decent compromise.

The finished conversions are fairly convincing. They stand up well next to the new Deathrattle guys, and their upright (rather than hunched) pose is more intimidating.