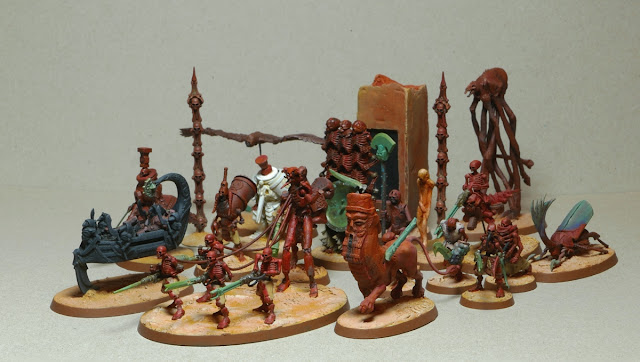 Recently I revisited one of my longest running projects, and one of my favourites to return to: Necrons. Pictures and info on all the new conversions I added below the jump...

Here's a group photo of the four new units I added with this update, plus two scenery elements. Since I'm going to dive into the units in this post, I'll start with the scenery bits. Left over bits from the Flesheater Courts Charnel Throne scenery piece (this will make another appearance later in this post), these skull columns work as Necron Pylons. I think of them as colossally tall, spindly constructs that are mostly buried under the sand of the tomb world. With the Necrons' emergence, they have partially risen out of the sand to facilitate a communication network (or whatever other nefarious uses the Necrons might need infrastructure for).

First of the new units proper is a Heavy Destroyer. This conversion is based around a rearranged hood from one of the old Tomb Kings cobra riders. Luckily I've had it in my bitz box from back when those parts were more easily available. 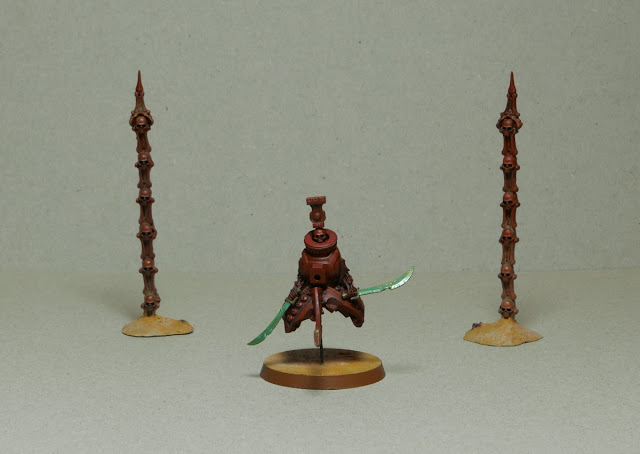 The model has paired energy scimitars from the Deathrattle Skeletons kit, which I have a lot of spares from after making an entire Skeleton army. I used a cross section from an Empire Cannon for the collar, a kitbash element I've used before in this project. It results in a cool heavy collar with a bit of ornamentation. The pointed prow is from the Dreadfleet Tomb Kings ship that I turned into a Necron funeral barge. 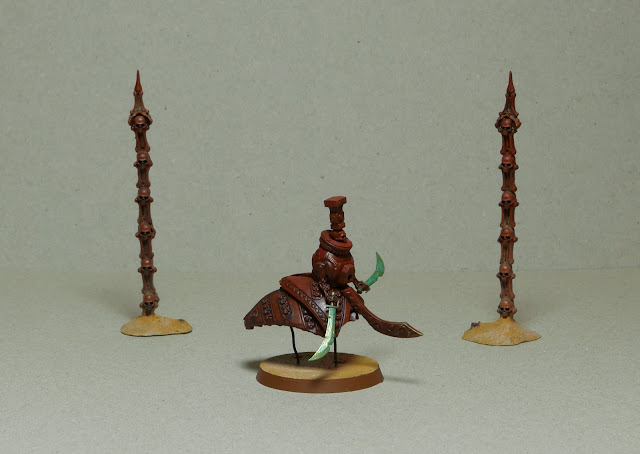 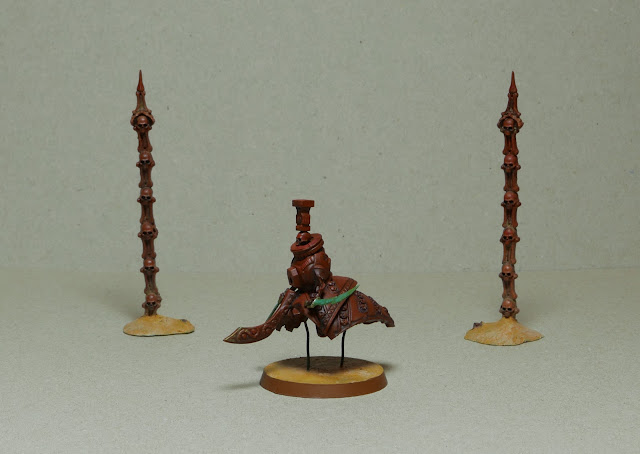 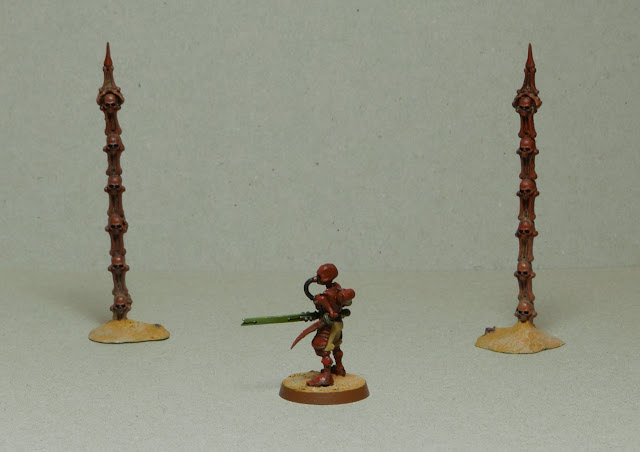 Next, a straightforward Necron foot soldier. A bitz box dive to add another "normal" trooper to the warband and tip the balance between "normal" mass infantry and the weirder elites. That said, it diverges a little from the original Necron warrior I made way back at the start of the project. This one has some sort of back armour and breathing apparatus (of course Necrons don't breathe, so what could this be?) 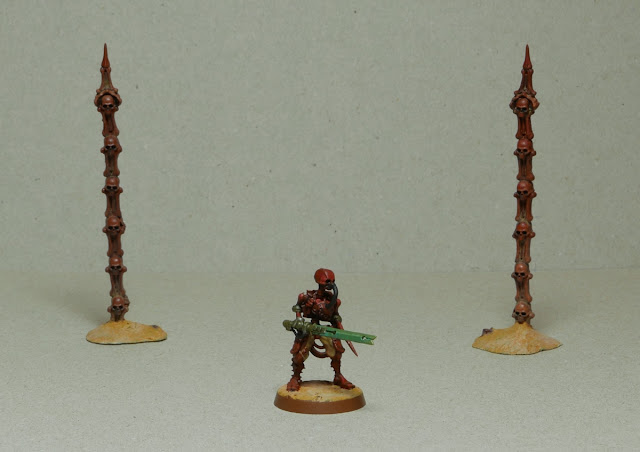 I mentioned at the start the pylons are from the Flesheater Courts Throne. I also clipped the interlocking grid of ribcages from that model to make the next model. As my handle suggests, I'm a fan of creatures with multiple heads and arms, so I did the obvious thing and gave this ribcage monster the right number of arms, heads and legs.

The throne piece has a hole in the front for slotting in the seat of the throne. Looking for something to fill that gap, I found a Stormcast shield fit perfectly. Lore following form, I decided this big satellite dish is a Gauss Collector weapon. 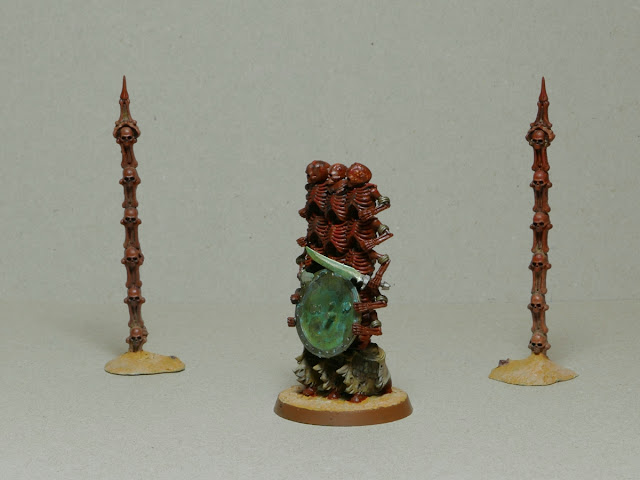 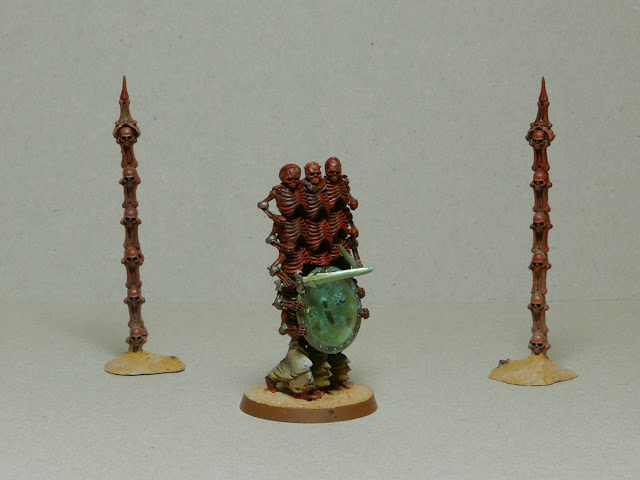 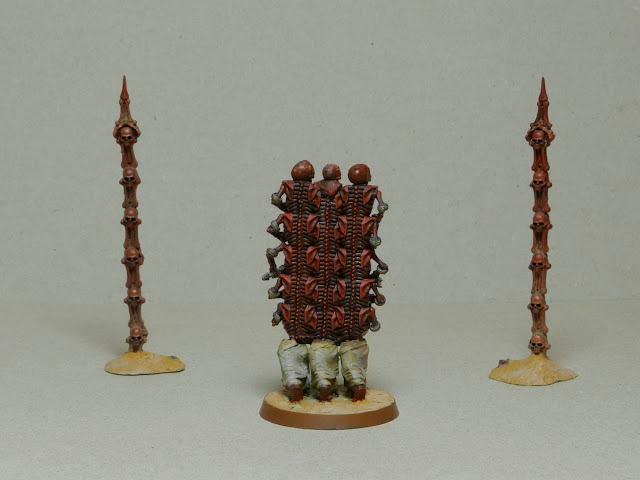 I would have preferred normal skeleton legs, but I was working with what I have, and that meant robed Grave Guard legs.

Finally, an idea I wanted to make since my first foray into this project: a hard-networked Necron unit. This consists of four Necron footsoldiers connected by cables to a master control Necron. 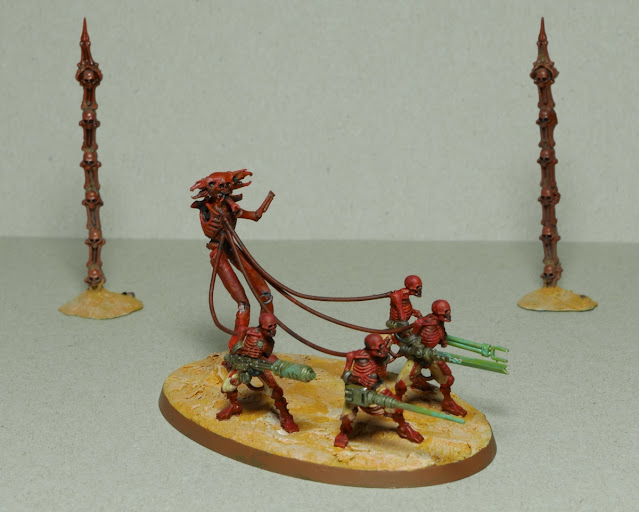 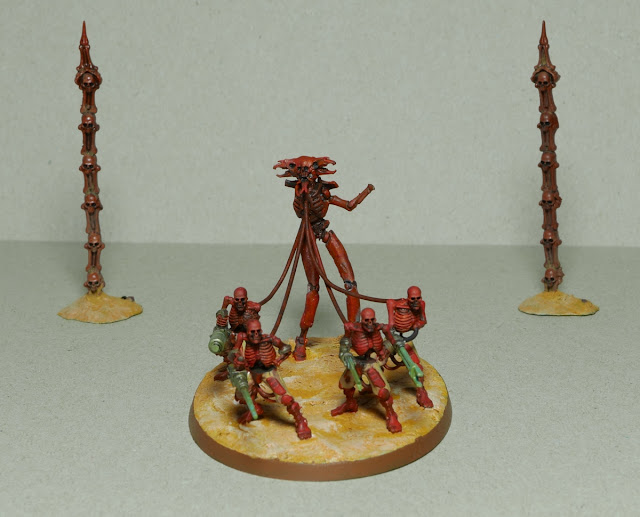 Each of the warriors has a different weapon. The standard Gauss rifle and Gauss cannon use the same AdMech parts as I used elsewhere in this project. The other two weapons are kitbashed, and represent some sort of highly specialised weapons this unit has. Under the direct control of the master node, this unit has ultra-precise fire discipline, and can direct all four weapons at the exact same spot with perfect phase timing. 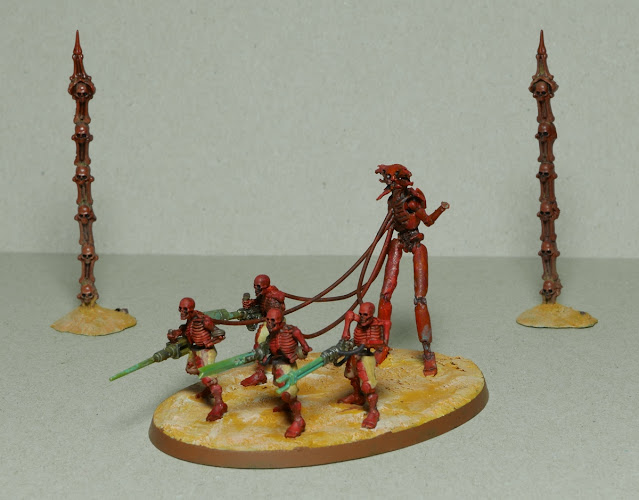 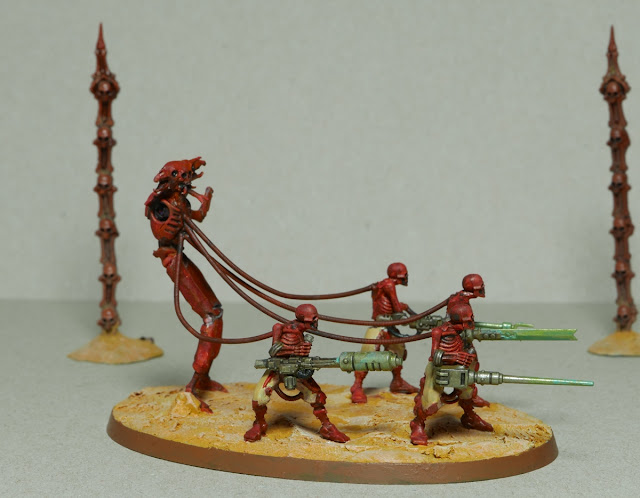 The cables are an old guitar string, a technique I've seen in many 40k builds. It works very well for textured heavy wires. 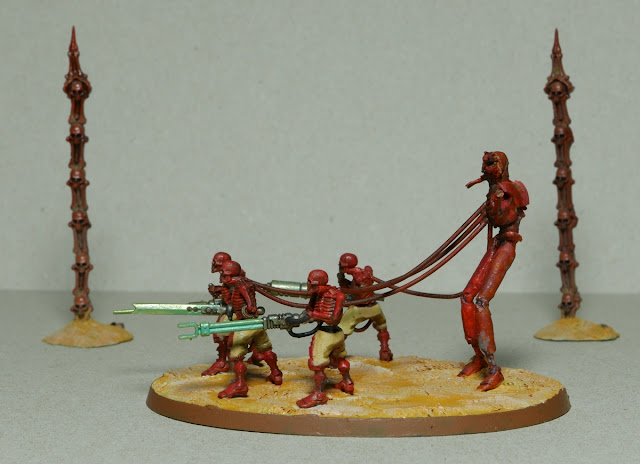 While I planned to give the controller Necron a second arm and hands, I decided to leave it ruined for two reasons. Visually, "broken" figures help suggest ruined statues and ancient architecture. And missing limbs suggest the cruelty of the Necron civilisation - in turning their people into machines, they kept only the parts essential for operating weapons.

The controller Necron is inspired by the paintings of Wayne Barlow. It's kitbashed from a normal Necron Warrior, with extended legs - funny how much bigger those models are compared to normal Warhammer skeletons now. 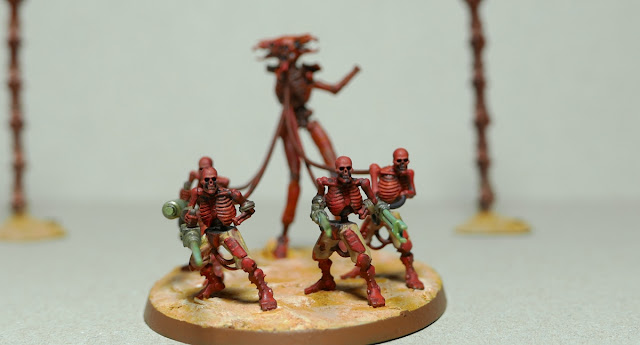 While I mostly used older-style skulls in the rest of the project, by this point I was running low on them and it was important that these warriors look uniform (they even use the same legs, in pairs, to reinforce their unified postures). Instead they got newer skulls and old skool beige plastic skeleton ribcages.

Thanks for reading! It's taking me a while to get everything blogged. You can always keep up with me on Instagram, which is a little faster but with less writing. Next up, I'm going back to Mordheim.