The second unit finished in this first wave of Space Wolves builds. A MSU Intercessor squad with assault bolters and a thunder hammer. More pics below the jump. 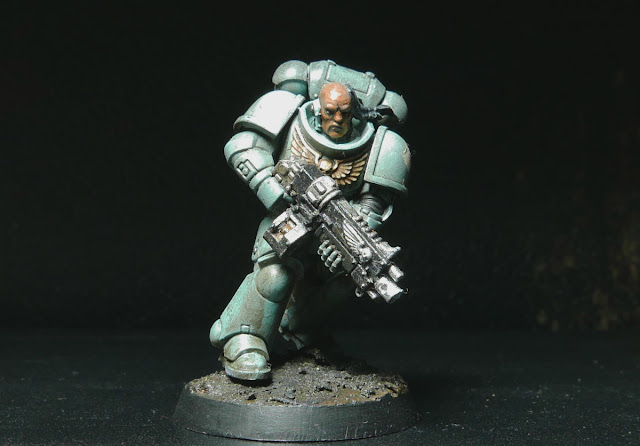 For this Space Wolves project I'm going mostly Primaris and orienting them around close-range assault tactics. So these Intercessors get assault bolters for shooting as they advance at the enemy. 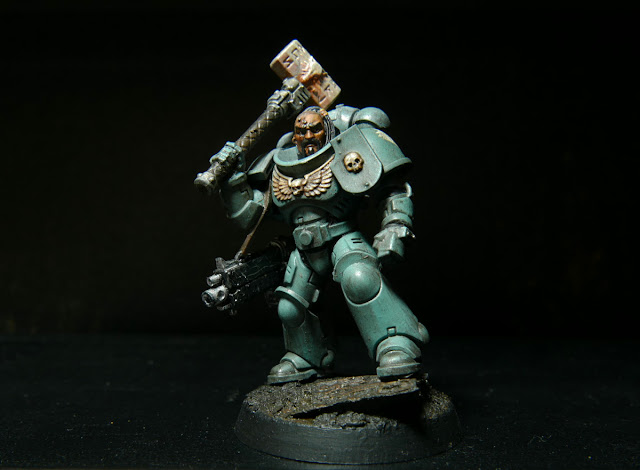 And the lucky sergeant gets a gigantic power hammer. A little bit of chopping and pinning was needed to get an appropriately posed arm to work with a Wulfen's hammer. And his unburdened left arm was the very last thing I added to this squad, since I was trying to figure out how his pose would work with his heavy stance. 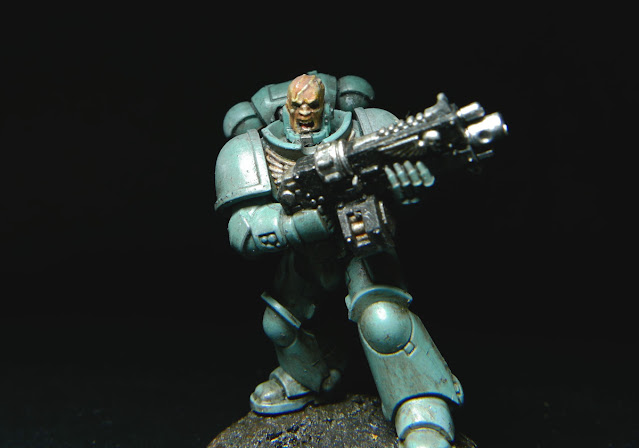 The heads are from a combination of Khorne Reavers and Marauder Horsemen. Both kits have excellent "angry" heads that are scaled just about right for Space Marines. Space Wolves of course aren't fond of helmets. I trimmed them to fit into the unhelmeted cowls from some bare Space Marine heads. The sergeant gets the impressive head from Korsarro Khan. 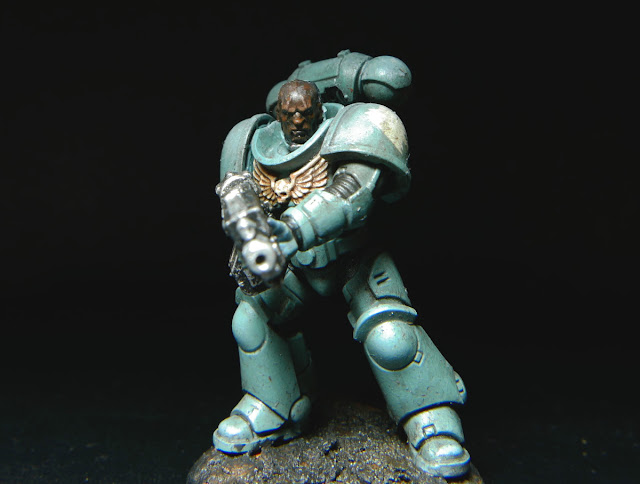 As with the Dreadnought, the armour is airbrushed with several layers of Vallejo Pale Blue and then weathered with a messy dark brown glaze. No edge highlighting. It makes for a quick paint but requires a really neat base coat. The shoulder icons are a rare Space Wolves logo in white taken from an Epic 40k transfer sheet. 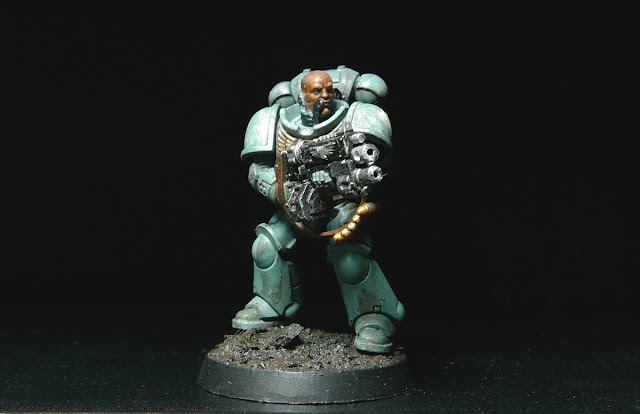 It was important to me to paint a range of skintones on the faces. For one thing, the brown skin looks great next to the grey-blue armour. More importantly, it's nonsense to see Space Marines always painted up as white guys considering each chapter has at least an entire planet to recruit from. The Space Wolves lore mentions darker skinned people living on Fenris, and even on our own planet the colder Arctic regions are populated by brown-skinned indigenous people. The Vikings themselves comprised several ethnic groups that travelled as far as Asia and America. Also I can't resist a bit of deconstruction, which is why my Space Wolves are a multi-ethnic army of trans anarchists (more on that later).
Thanks for following! There's plenty more Space Wolves on the way soon since this is my main project right now and I'm aiming to have a complete battle-forged army at the end of it.
Hek. 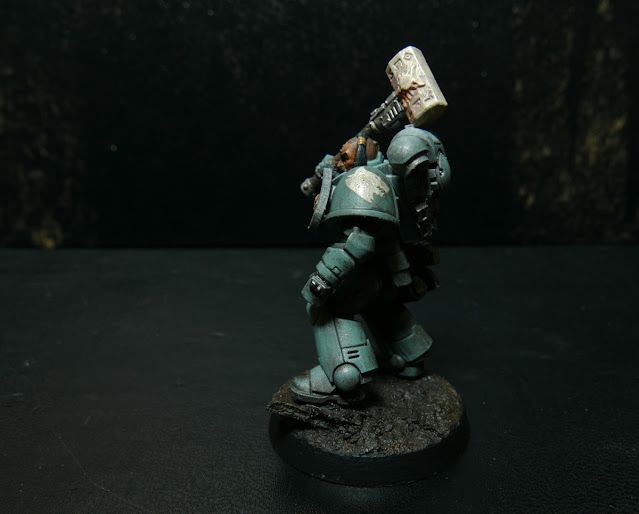 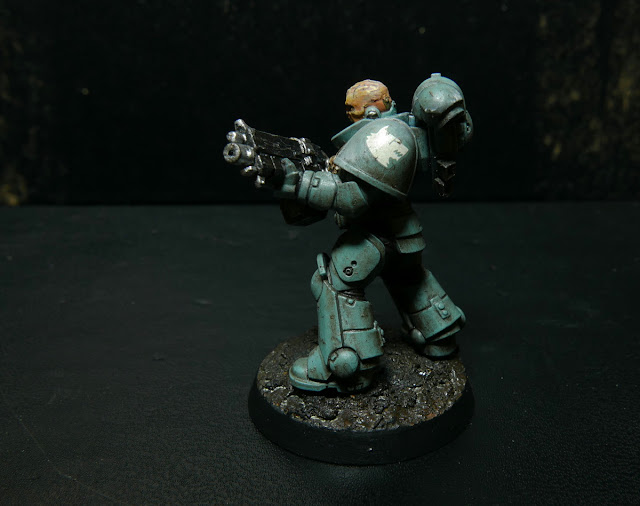 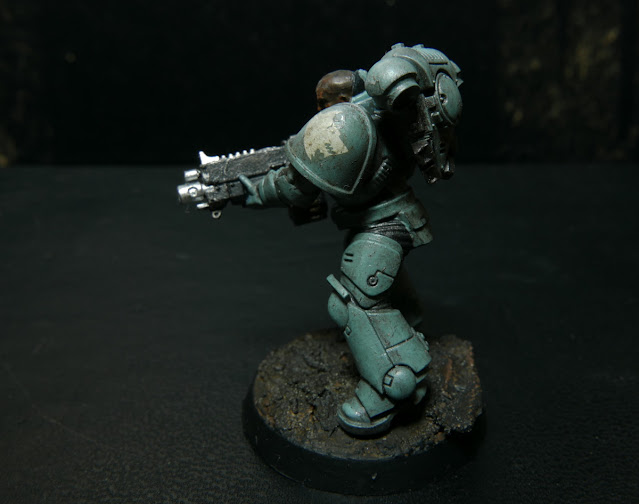 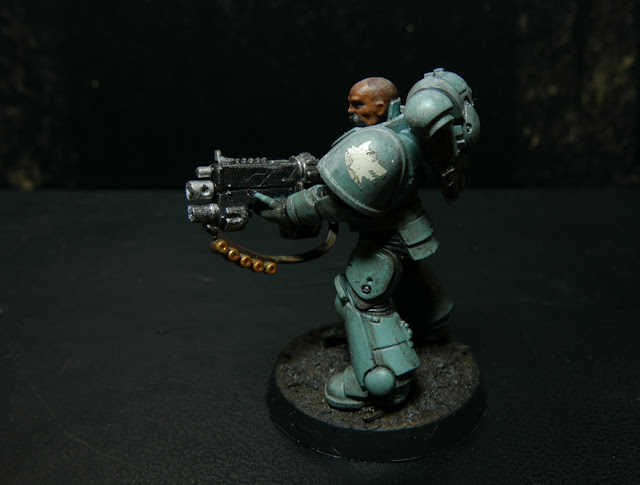 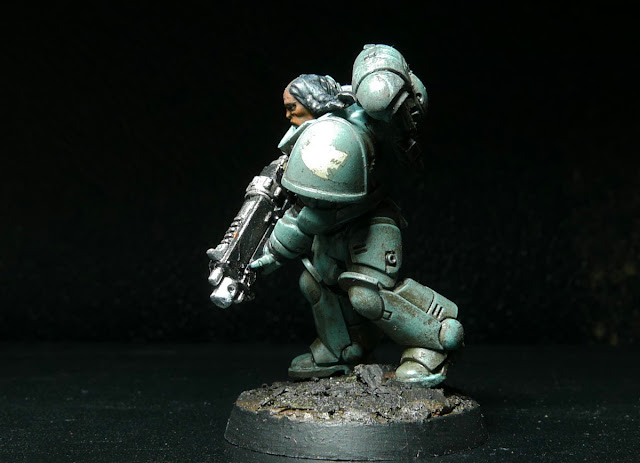