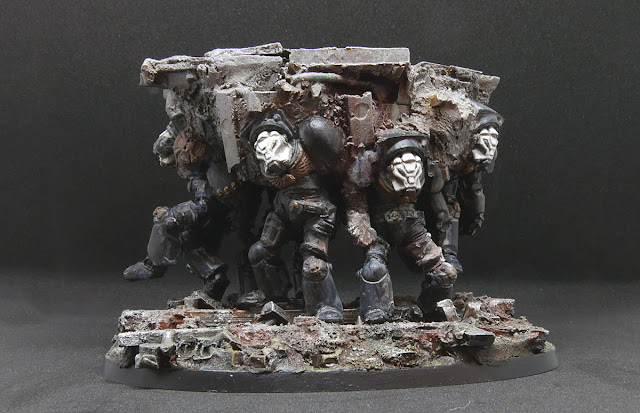 Once again, Iron Sleet is invigorating the Inq28 scene with a new scenario, The Primogenitor. I was inspired to make an existential space horror piece to patrol the endless corridors of the space hulk. 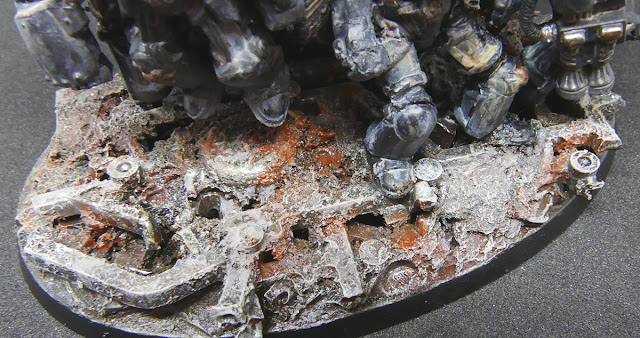 Urczxtvyx would have none of that thing. His warp-senses pricked up like a common beast of Terra and he fled in alarm; which I have not seen him do before. Yea he fears me as his bond-master but his fear of this was greater. I found him cowering in a crawlspace and exerted my power to bring him out again. I told him I shall unbind him and summon a new familiar if he were to flee again from a mere shadow like that. After some punishment he told me that he could smell no souls in that walking wreck, no intelligence, that it was a conglomeration of things walking in the manner of an animate creature, and all being had left it. This was abhorrent to him and he wanted nothing to do with it. 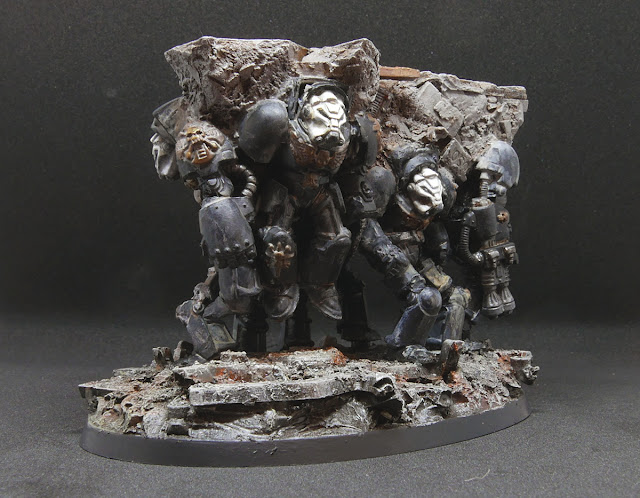 The sickness is of the air, of the nature of the space. It is no disease, nor even metadisease like the Gellerpox that afflicted [REDACTED]. The vessel has spent so many millennia colliding, crashing, combining, absorbing, that this mere pattern of movement of dead objects through the cold void has engrained itself into the nature of this place. A quality of its being has changed. It is very hard to describe this at all, let alone to do so with Imperium-sanctioned language. The fabric of here has worn away… things have got into a groove.

As far as I can tell the Astartes squad simply gave up being beings and became things. A quality of their being changed. There was likely no decision on their part. They stopped being alive – and it is important to note that they did not die. There are no dead men in that hulk, and I would say there are no individual components where men once were – it is all one piece now. These giants of the [REDACTED] chapter all at once became inanimate – something like furniture, or the mechanical components of a boltgun. And it is certainly remarkable how they have joined together with other detritus into one thing that certainly has no spark of consciousness itself and yet moves around like that. I would dearly like to know if there are any items of interest that may be tangled up in that mass. 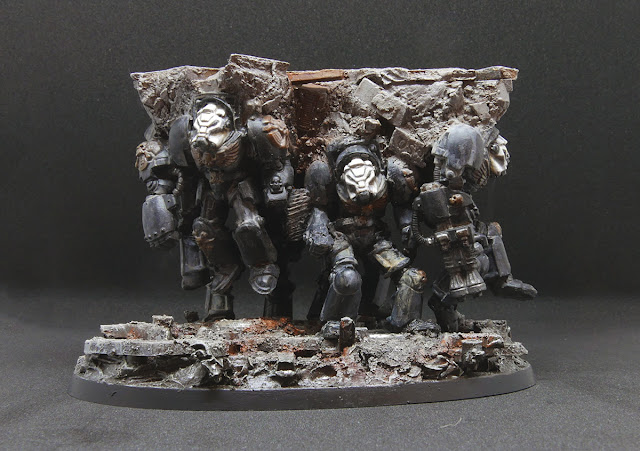 … reporting non-usual agglomerations of material … multiple light craft of non-Imperial origin collected by the space hulk's gravity well … conjoining in ways suggesting … [communication is lost for 140 minutes] … just gave it up. As if there was no decision at all … no longer … of them …
I do not fear [inaudible] what I fear is that some combination of physical laws that we do not know, or do not know well enough, laws that make themselves known only in the quietest deepest places in space … can take away all that a man is … leave him still walking with [communication lost] 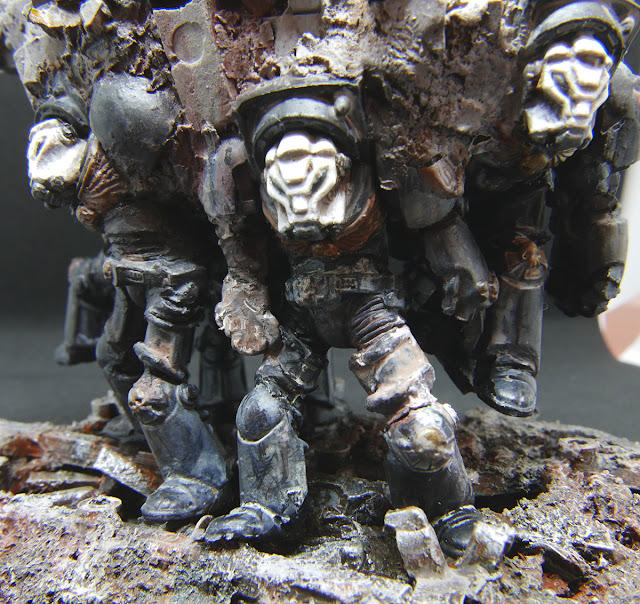 Some design notes on this thing. In short, it's a space hulk made of space marines. You could call it a terminator hulk, or you could think of it as a kind of zombie.
Back when I was brainstorming the idea (it took me a long time to build and paint, so this was a while back) I settled on space marine Terminators for two reasons. 1: the resulting hulk would be massive and tank-like, a truly imposing monster. 2: it adds to the blasphemous horror to see some of the Imperium's finest warriors reduced to a shambling thing. I expect that this thing would have a serious morale impact on Imperium forces who witness it, and also (as suggested in the fiction intro) on Daemons, who are seriously spooked by an apparent space marine-shaped snack that in fact contains no nourishing souls at all. For the same reason it might weird out Psykers in the same way as pariahs do.
Since it's got no intent and just stomps its way around the corridors of the Primogenitor space hulk forever, it would be an unusual thing to play in-game. Apart from its demoralising effects it has no weaponry other than sometimes braking into a run and simply crushing anything in its path. I built it with a flat top to help imply its status as almost a terrain feature, and I think adventurous fighters could land on top of it and ride it around (no steering it though – its behaviour is a total mystery to all). 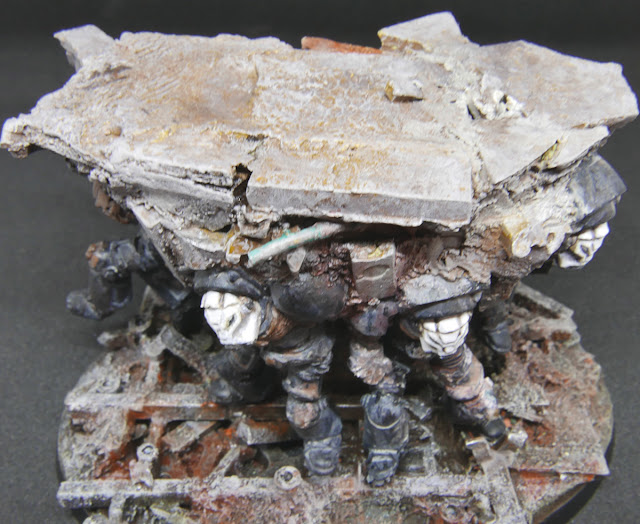 The construction process started with cutting the old plastic terminators apart so I could pose and true-scale them better. The torsos were all glued to a frame made from sprue, and the bodies were assembled around that. The bulk of the debris was made from milliput around a sprue frame, with molded milliput shapes added into it before it set. I added texture to the top surface by pressing thin vegetable netting into wet milliput (much as I tried, I couldn't actually glue the plastic netting onto the surface).
The base – a space hulk environment, which I imagine to be miles of twisted scrap metal – was made from layers of sprue offcuts, covered in dried teabag leaves and air-drying clay. 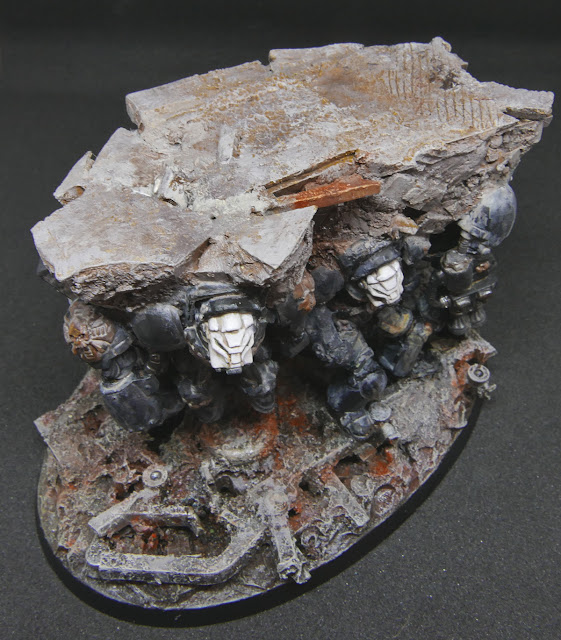 As for painting, I settled on a neutral colour scheme for the Space Marine armour: black with white helmets. The white helmets appear skull-like and help contrast the dead black of the eye lenses. The black armour helps to show up the millennia of dirt and grime. I didn't paint any chapter markings because I felt like graphics would detract from the more important details in this case. 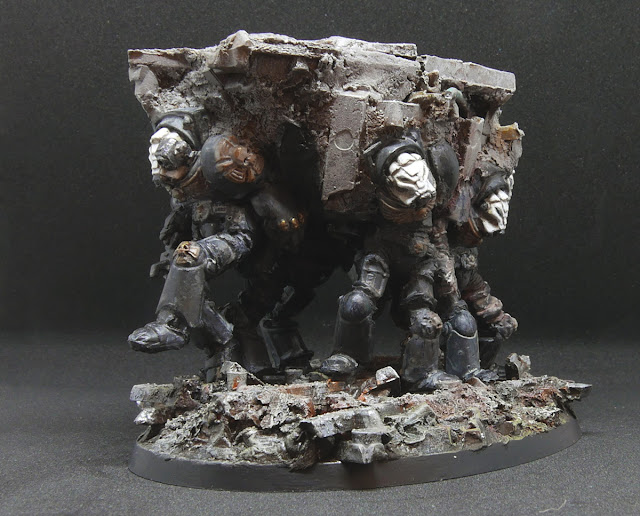 The weathering was an important part of the paint scheme. Importantly, I avoided corroding or scratching the armour itself, to indicate that Space Marine armour is basically indestructible and would not corrode over time. Instead, it's accumulated a lot of dirt, particularly in the crevices. In some cases, as you can see on one of the "load-bearing" marines above, the dirt has apparently calcified over limbs, as if stalactites are forming from mineral deposits in the other detritus. (This also helped to obscure some of the details I couldn't get to look right after re-posing the models). 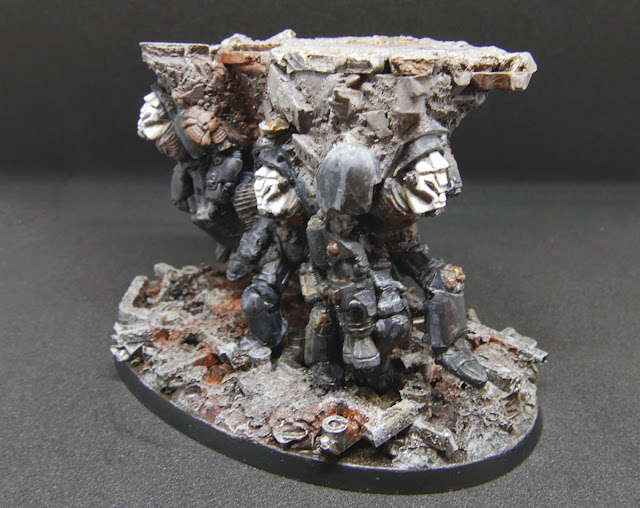 The dirt was painted with a mix of light browns combined with Vallejo plastic putty to add texture. I tried to emulate a pigment-based weathering effect without owning any pigment myself. The mix was applied as dilute as possible, then rubbed away in places, smeared and scratched with rough brushes. If the dirt is on a vertical surface, it's directed to look like it's running down the surface. Some of the exposed surfaces – and especially the feet – are mostly scraped clean of dirt (to suggest the hulk bashing and scraping against its environment). 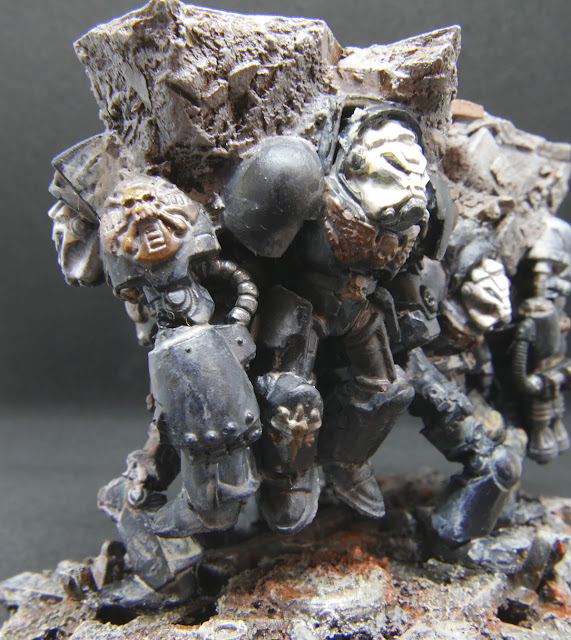